We just released a new version of Wacnet.

For all the others, you can get it there: Download Wacnet.

Some newer OSes weren’t compatible with how Wacnet was displaying its icon in the system tray.

This is now fixed. You can use the system tray icon to: 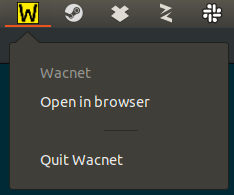 Our open source BACnet library Bacure continued to evolve in the last year. This Wacnet update bundles the latest improvements, most notably:

Let us know if there is something else you’d like to see in Wacnet.